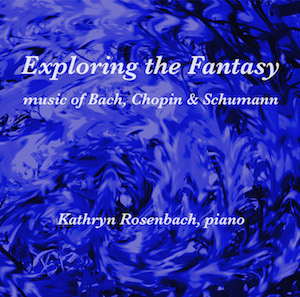 Pianist Kathryn Rosenbach was born in Buffalo, NY to musical parents. Kathyrn is a graduate of SUNY at Buffalo with BFA and MFA degrees. She has pursued doctoral studies at the Eastman School of Music, and was awarded an Artist Diploma from the prestigious Accademia musicale di Chigiana, Siena, Italy where she studied with Guido Agosti. Kathryn is widely acclaimed as both a solo artist as well as chamber musician, performing throughout the United States, Canada, Switzerland and Italy.

Kathryn’s repertoire reflects her wide-ranging interests in various musical styles and periods. Her recitals have included works ranging from Handel and Bach to premieres of contemporary composers such as Yehudi Wyner and Marlos Nobre.

Active as a composer, she was a member of the noted Composers in Red Sneakers from 1996-2002. During her tenure she presented many of her own works and performed many works of young and aspiring composers.

This recording “Exploring the Fantasy” reflects her love of the standard literature with its rich emotional content. Noted for her highly emotional and passionate performances, Kathryn has been hailed as a committed and richly humanistic performer.

Recorded at the Cabot Room of Powers Music School in August 2015.